Judith has a merry …

Tree trimming.  What clever use of a left-over head.  Holofernes in the Christmas Spirit.

Judith has a surprise

And what a pleasant surprise!  Another Judith in my own backyard.

A rather unusual portrait of Judith.   Not only is she missing Holofernes head and his fauchion and her maid, but her arms seem to be gone as well.

Strange, because Ezekiel studied human anatomy at the University of Virginia for a short time before moving to Cincinnati in 1868 to be with family and attend J. Insco Williams’ Art School.  You think he would have remembered the arms.   Failing to gain an apprenticeship, he traveled abroad to study at the Berlin Royal Academy where he developed a style that was romantic, elaborate and ornate – and highly popular in the Victorian era.   After the Franco-Prussian war (1870-1871) and a brief imprisonment, Ezekiel went to Italy and began producing the most memorable work of his prolific career – which included Judith.

Neither did Ezekiel do Judith any favors when it came to her profile, in giving her her an unusually large nose – not at all classic.  It may be that he was trying to portray her semitic heritage, it may be that he was reflecting a family member (since he was descended from Spanish-Jews), or it may be he just liked her nose that way.   Unfortunately, these days she probably would have begged for rhinoplasty for her 16th birthday and just become another pretty face instead of an avenging heroine.

Now for something completely different (LXVIII) 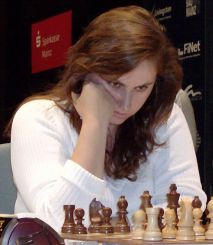 Judit Polgár is a Hungarian chess grandmaster, achieving the title at age 15 years and 4 months – the youngest person to do so at that time.  The only woman on FIDE’s Top 100 Players list, her rank as of March 2012 was No. 29 in the world.  She is by far the strongest female chess player in history – with the distinction of being the game the first female player in chess history the beat the world’s No. 1 player in competitive play and the first No. 1 ranked female player in any sport to beat the No. 1 ranked male player.

Posted by judith2you on December 23, 2012 in something completely different

Judith dreams of a White Christmas

Judy Haynes as played by the lithe Vera-Ellen, that is.

Posted by judith2you on December 23, 2012 in Cacciatore

Judith: Does she or doesn’t she?

Only her hairdresser knows for sure.

Posted by judith2you on December 22, 2012 in Cacciatore

Judith: So what are you thinking?

Maid:   I was thinking Chinese.

Judith: Eh, i worry about the MSG.

Maid:  Yeah, how about Indian?

Judith: Reminds me of a former boyfriend.

Judith:  Burgers is good. Just don’t get the bags mixed up.

Posted by judith2you on December 21, 2012 in Cacciatore

We still don’t know who commissioned the sculpture, even if its grim subject and the dramatic force of the figure make it apt for meditation on sin, “Holofernes” is the personification of Vice defeated by Virtue, embodied by Judith and death. (1) 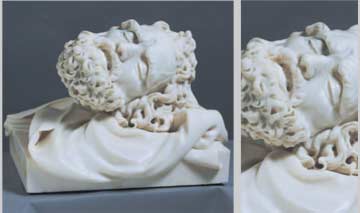 She was not known for her housekeeping.  Just like Judith to leave a severed head laying around for us to meditate on sin.

Judith throws in the towel 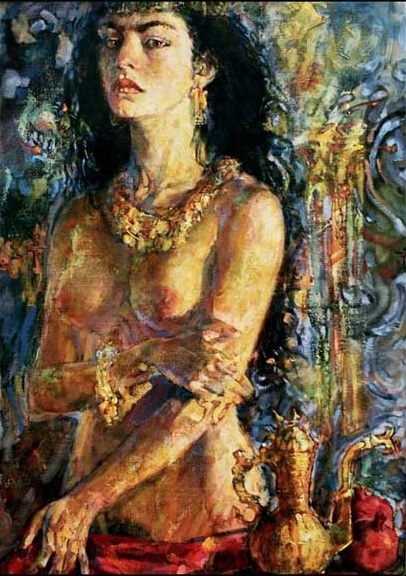 Judith grumbles to herself:

Unbelievable.   Left to clean up the mess again.

First, he wants me to play Genie in a Bottle, with all Three Wishes.    Next we have to have Fun with Food.   It ends with a Drunken Stupor.   And then the Decapitation.   Geesh, he was no help at all in that endeavor.

Now I have to find a bag to cart his bloody beanie back to Bethulia.

I swear this is the last time.  When i get home, I quit this seduction and assassin business.

And become a lesbian.

Judith in the Holy Field

At least, it is supposed to be Judith.

I feel as dejected as the statue slumped over the sarcophagus on the right,  head in hand.  Why is this so DIFFICULT?!

Let me start at the beginning.    The Camposanto (“Holy Field”) or Monumental Cemetery in Pisa was constructed in 1278 around sacred dirt brought back from Golgotha during the Crusades.   Later decorated with extensive frescoes, it was the burial place of the Pisan upper class for centuries.   A legend claims that bodies buried in that ground will rot in just 24 hours.   Is that a good thing or a bad thing?

Actually, this fresco of Judith is not one of the Big Ass Frescos in Camposanto.   No, those frescos are a century older – at least – and in a large room off the north gallery.   The one everybody hyperventilates about is The Triumph of Death by Buonomico Buffalmacco, dating from the 14th century.   The Judith fresco is in a different gallery next to a large rusty chain from the Pisa port, taken by the Genoese and later returned to Pisa in 1860.   Sure, just what I would steal to piss off my enemy:  rusty chains from the harbor.

Once again, trying to view this image on a computer screen is frustrating.   Because somewhere in this crowd, Judith is supposed to be loitering.   She appears to be front and center – but why?  I don’t see a severed head  – unless it is that brown lump that looks like a sphinx or a goat –  so what is she doing?   Is this the entrance into the Assyrian camp at the beginning or the return to Bethulia at the end?

Argh.  I would be better off trying to figure out the Leaning Tower.
Leave a comment

Posted by judith2you on December 18, 2012 in Cacciatore 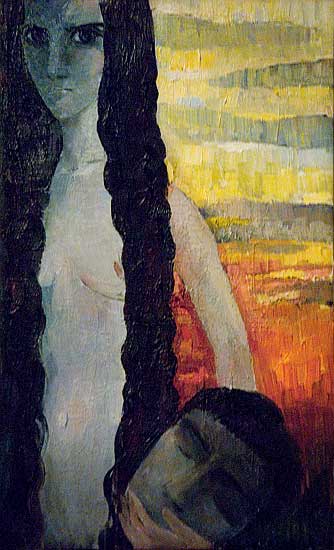 Judith could use some support.    Perhaps she should turn to her family.    The Addams Family.