Eh, I’ll skip being sappy or sentimental or philosophical or even humorous.  I’ve tried out all those persona across these posts. I feel like 700 images is a nice, round number and a good place to stop.

Did i attain my goal of learning about Judith?  In spades.

Did i attain my goal of learning about myself?  Absolutely.

Did i attain my goal of learning, period?  You can’t stop me.

I do own my name, embrace it and can be what it represents.  I can be the giggle-y girl in the poodle skirt or I can be the avenging Amazon with a falchion.  Or i can be naked.  Judith is all those things and more.

Thanks for coming along on the journey.  And let me know if you encounter any Judith’s I haven’t met yet.

I was really surprised by this painting.   My first guess was: the work of a contemporary South American artist. Judith has the olive complexion, the massive dark hair, a stylish one-shouldered sheath in spicy tones, the gold loop earring and bangle bracelets of a Latin American style.  So imagine my astonishment to learn this is the work of a Swedish painter from 1924.  This depiction must have been shocking to the audience at that time, even in light of Fauvism, Cubism, and Expressionism.

Judith and the Backseat Driver 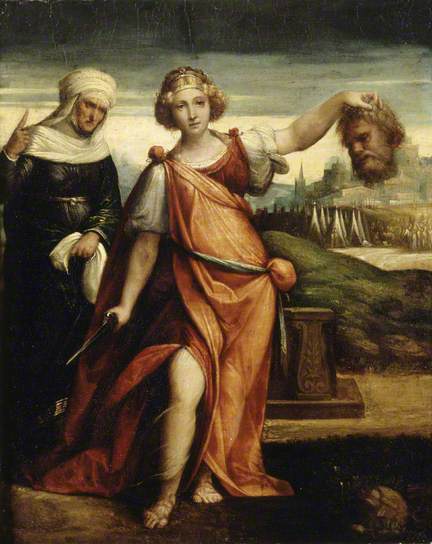 I didn’t go to parochial school, but I’ll wager that this artist did. And he is suffering from PTSD after a run-in with one of his teachers.

Judith has apparently made it out of Holofernes’ camp and is thrilled to be on her way back to Bethulia.  She is so excited about her accomplishment that she has removed the severed head from the bag and is practically skipping down the road towards home.  But right behind her is the Maid, giving a frowny face and raising a pointy finger to the heavens – as if to say “Watch where you’re going!  Don’t be so full of yourself! You’re going to drop that thing and I’m not going to chase it down the hill!”

At least you can fire a maid.

Judith and the Melon

Someone once called me “Pumpkin Head” because they thought my face is round. and maybe I used too much bronzer.  I thought the description was undeserved.

However, in this case, it appears Judith does actually have a pumpkin on her head.

Now for something completely different (LXXXI)

One more! One more!!

In the musical A Chorus Line, Judy Monroe is a nervous, scatterbrained, gawky, tall, warm, and hopeful woman – who reflects on her problematic childhood during the audition in “Montage Part 3: Mother.”

Enjoy Heather Parcells as Judy starting about 11m20s.  She is the redhead in the mauve leotard who acts like a Judy.

Posted by judith2you on April 12, 2013 in something completely different

Judith has a brand new bag

What can you do after you determine that your butt looks big?

Buy a new handbag, of course.

Judith and the British Empire

I could continue to ask: DOES THIS MAKE MY BUTT LOOK BIG?

However, this is actually a posterior view of the Maid – not Judith, who is standing in the background with the fauchion – and I have tired of making cracks about butts.

So instead I would rather talk about Frank Brangwyn.

Imagine producing over 12,000 works across paintings, drawings, illustrations, lithographs, woodcuts, stained glass, furniture, ceramics, table glassware, interiors, and buildings. Imagine mural commissions that cover over 22,000 square feet of canvas (1).  Imagine being commissioned to paint 16 large works that cover 3,000 square feet of the Royal Gallery at the House of Lords at Westminster – and then having them refused for being “too colourful and lively” for the location.  Imagine being the jack-of-all-trades, Frank Brangwyn.

The rejected murals – known as the British Empire Panels – were commissioned in 1924 to commemorate the First World War. Brangwyn, an official war artist, was selected and chose to create a “decorative painting representing various Dominions and parts of the British Empire.”

Brangwyn’s intention was to enliven the gloomy Royal Gallery with ‘decorative painting representing various Dominions and parts of the British Empire’. No geographical logic was intended; the panels have a spirit of fantasy showing a protected world of beauty and plenty, based artistically on Brangwyn’s many travels and also his studies of animals in London Zoo. (2)

Obviously not the intention of the House of Lords, who rejected them after seven years of labor.  Thus the panels were acquired for the Swansea Guildhall and installed in Brangwyn Hall in 1934, where this artistic achievement is enjoyed by the public on a daily basis. (3)

In order to see all 16 panels, go to BBC: Your Paintings – British Empire Panel.  They truly are an explosion of color and life and lushness that would have put the House of Lords in a stupor.  If they were not in a stupor already.

So much more fun than talking about the butt of Judith’s maid, don’t you think?

Continuing the question:  DOES THIS MAKE MY BUTT LOOK BIG?

Sometimes it helps to see things from different angles. 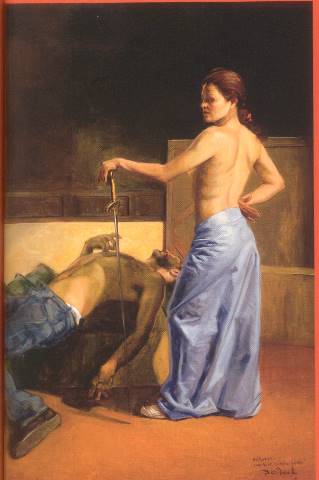 Judith: the Back Story

Judith goes on wondering:  DOES THIS MAKE MY BUTT LOOK BIG? 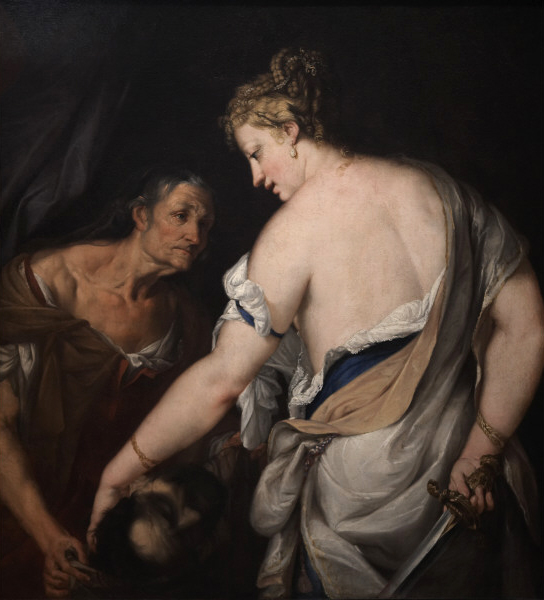 Judith:  (sigh) All this working out and I’m still not happy with the size of my butt.
Maid:  Well, wearing white across your bum doesn’t help.
Judith:  Also not a good choice for decapitations.
Maid:   True … what kind of work-outs are you doing?
Judith:  I was spinning three times a week, but then my coccyx was acting up.
Maid:   You mean you had a pain in the ass?
Judith:  Yes, that’s another way of saying it.  Then I was using the stair climber but that seemed to be going nowhere.
Maid:   Squats and lunges?
Judith:  Yup.  Leg and hip extensions, Dumbbell stiff-legged dead lift, fitball glute bridge, Frog Butt boosters …
Maid:   Maybe you’re overworking it.
Judith:  I hadn’t thought of that.
Maid:   Who is your trainer?
Judith:  Some girl named Kim Kardigan. Or was it Kashian? Or maybe …

Thanks to Rebecca Daroff DiMattia, Stories in Art for this find.

Posted by judith2you on April 8, 2013 in Cacciatore

For the next few days, I have a series of paintings that all ask the same question:

DOES THIS MAKE MY BUTT LOOK BIG?? 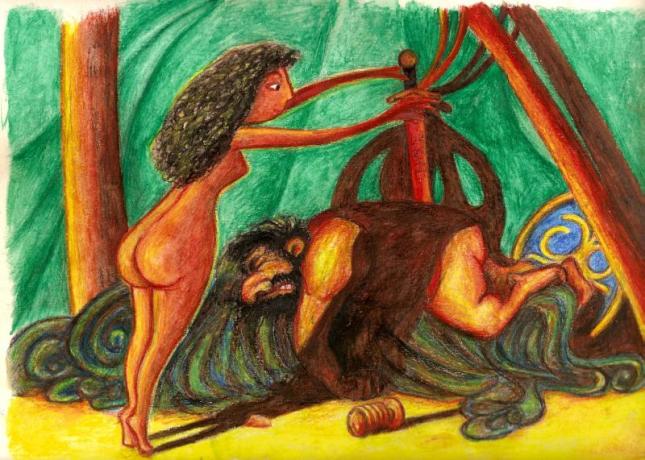 It appears that Holofernes gave the wrong answer.