Now for something completely different (LXXIV)

Some things are worth repeating, especially when the holiday season brings out Judy Hynes for another year!

One of my favorite Christmas movies is White Christmas.   With music by Irving Berling, it tells the story of a famous male singing duo who fall in love with a not-so-famous female singing duo at a Vermont sky lodge without any snow.    Judy Haynes was played by Vera-Ellen, while her sister Betty was played by Rosemary Clooney.   Clearly, Betty was the singing star – but Judy burned the stage with her dancing.   Here Judy sings with Betty the infamous song  Sisters, Sisters …

… and then here is a clever mash-up of Judy dancing Abraham with John Brascia.

Posted by judith2you on December 18, 2017 in something completely different

Judith in the Pink

“In the pink” means in very good health, very good condition, physically and emotionally.  While del Moro’s Judith obviously fits this description, Holofernes obviously does not.

This Judith emerged from the private collection of Roberto Longhi to be part of the exhibition “From Giotto to Caravaggio The passions of Roberto Longhi”  presented March 27 to July 20, 2015 at the Jacquemart-André Museum in Paris. The focus of the exhibition was a comparison of “the works of Caravaggio and those of his imitators, showing the influence of this artist’s themes and style on his contemporaries, first in Italy and then throughout Europe.” The exhibit also provided a glimpse into the artistic vision and careful collection of Roberto Longhi, considered the epitome of an art connoisseur and leading authority on Renaissance artists – especially Caravaggio.

As part of this exhibit, Battista del Moro comes centuries after Giotto (c.1270-1337) and decades before Caravaggio (1571-1610) – but this work is included as a possible “training piece” for Carravagio. It is speculated that he would have seen something like this and noted –

Del Moro plays wonderfully on the contrasts, in the idealized face of Judith and the more popular of her maid and between the decorative richness of the decor and the funeral character of the scene, accentuated by the macabre detail of the sinister look of Holofernes.

I don’t know that I would go so far as to describe this scene as funereal – although it is certainly macabre. Funereal suggests that there is grief involved and some tribute to the deceased. Instead, Judith and the maid seem anxious to escape and not at all troubled about having decapitated the general – and  I doubt if they will ask any one to prepare a eulogy for Holofernes. But the tension in the scene – the turn of Judith’s face away from the viewer, the maid receding in the shadow – those are elements that may have influenced Carravaggio in his own depiction of the carnage. And of course he made the scene darker – much, much darker – and less opulent.

Of course, I always worry about those jewels getting in the way and stains creeping onto the lovely fabrics. It would be a shame to mess up that lovely shade of pink with blood splatter.

Judith: Before and After This before-and-after of Judith is the work of Antonio Gionima, a partner of the late-Baroque period who exemplified the grand classical style of 18th-century Bologna. His promising career was cut short by his death from tuberculosis at age thirty-five.

Many of Gionima’s surviving works illustrate Old Testament subjects in strongly expressive compositions, dramatic chiaroscuro, and the elaborate mixing of wash, white bodycolour and occasionally oil paint in his drawings. Some considered him to be the most exciting painter in Bologna in the decade before his death. But Gionima appears to have a marketing problem: most of his commissions were not for public sites but instead went to private collectors – and thus he was neglected by later critics.

Which might explain how I got this far in the blog without noticing his work.

If you want to see a much more colorful image of “Judith Presenting Herself to Holofernes” (though much smaller), jump over to Artwork of the month: Judith (December 10, 2008) in the blog The Aesthetics of Composition in Abstract Painting. He must have a better camera than the museum. While you’re there, check out the other Judith’s residing in Minneapolis. She appears to be quite popular there.

Now for something completely different (LXXXII)

So I am watching one of my favorite Christmas movies – one I have watched about 10 times before – and suddenly I hear “My name is Judy.”

What? After all these years I realize that Love Actually has a character named Judy?

Yes it is true. And she plays a pivotal part. A part that can’t be missed. It was probably up for an Oscar for Best Supporting Actress.

Well, anyway … you decide.  Here is Joanna Page as Judy. And that other guy, it’s only Martin Freeman of Sherlock and The Hobbit.

Judith as the Runner Up

This rather ferocious Judith is one of those artworks that seems to be lost. Not just to me – but truly lost. 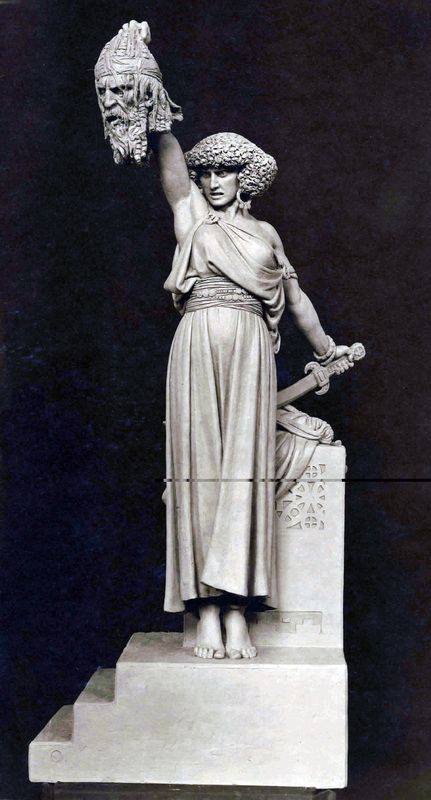 The sculpture titled “Judith and Holofernes” is the work of François Victor Bazin (1897-1956), and it won runner-up for the 1925 Prix de Rome  – a scholarship that supports French art students in Rome.  Bazin was enrolled in the the Paris École des Beaux-Art at the age of 16, after his parents returned from teaching as engravers and medalists in Chile during his childhood.  But three years later in 1916 during the First World War, he joined the fledgling French air force and was assigned to Escadrille SPA.164, passing his pilot’s license in 1918.

(And for those who don’t know about the French air force: SPA means his division flew bi-planes manufactured by SPAD – Société Pour L’Aviation et res Derives. Bi-planes … think about it.)

After the war, Bazin completed his studies and was contacted by the Hispano Suiza Company to create the radiator cap of their future cars. They requested that it be based on the bird motif that adorned the bi-plane “Vieux Charles” flown by French national hero Georges Guynemer. Bazin was so successful that between 1920 and 1935 he created a large number of mascots for car bonnets (“les bouchons de radiator” aka hood ornaments): Stork (1920, Hispano Suiza), Mangbetu Woman (Cruise Black Citroen), Triumph (Isotta Fraschini), elephant head (Latil), Centaur (Unic), Unicorn (Unicorn). Several have been recast by Bazin’s granddaughter and can be purchased here. 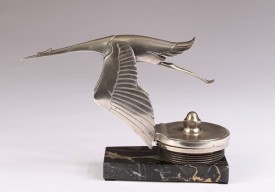 “Cigogne” for the Hispano Suiza 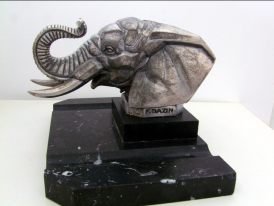 “Tête d’éléphant” for the Latil

“Triomphe” for the Isotta Fraschini

“Licorne” for the Licorice

“Centaure” for the Unic 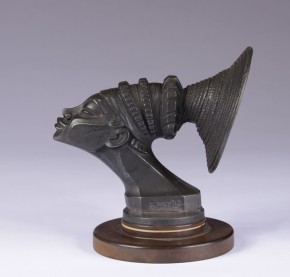 Unfortunately I can find no record of what happened to his statue of Judith that nearly won the prize. His grand-daughter, Julie Bazin, is equally perplexed. We both thought that the Beaux Arts might still have it because they have traditionally kept the works of former students in their collections – and because they have Bazin’s plaster bust “La Volonté” which he completed for the school’s competition “La Tête d’expression” in 1922. However, in her correspondence with them, Mme Bazin has yet to receive information on its location.

In the meantime, she was kind enough to share these additional photographs. 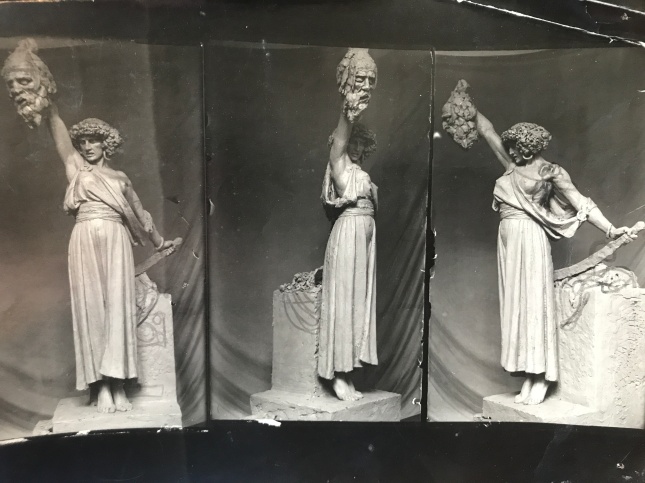 Alas, it would be amazing to see firsthand the intensity of this Judith. Standing on the balls of her feet, she is arched forward.  Her left hand holding the fauchion is extended fully behind her and her right hand holding the severed head is extended fully upward in front of her. Her head is slightly bowed with the exertion. She reminds me of a dancer or a diver giving her full energy to reaching outside herself, poised to launch forward with her bloody prize.

Yes, I can envision this as an appropriately feminist les bouchons de radiator for my next SUV.