Doubt, regret, worry and consternation. All conveyed subtly in this exotic batik. Compared to the carnage displayed in many depictions of Judith, this is a very contemplative portrait.

Victoria Dubovyk is “an artist of various textile forms” who has devoted over 30 years to batik (a technique of painting on silk).

The artist says of this artwork –

This artwork is based on the well-known biblical story that inspired numerous artists for many centuries. Normally Judith is depicted as a person that is fully sure in rightfulness of her action. To the contrary, my Judith is full of doubts and she even feels sorry… An action was done in the gust of anger, and now comes comprehension…

I have chosen quiet silver-green-grey colours for this work, so that they do not come into conflict with numerous decorative elements in the upper half of the painting, which symbolise the thoughts going through the Judith’s head. In my interpretation Judith is only a woman, she has her doubts, she is sorry, she is worried and tries to understand if her action was right or wrong…

This artwork is made with use of complicated author’s technique of batik and painting. This artwork is painted on the natural silk cloth with professional German silk paints, batik textile dyes, waxes, etc. (KREUL Javana). The paint is water based, has no smell, and is fade and wash resistant (after fixing).

Judith is part of “Women’s Whims” series, in which “whims are often mysterious and unpredictable and sometimes intelligible and rather straight forward.”  You decide which is which –

Judith in less than six feet

Well, my friends, it’s Pandemic time. Time to maintain your distance. Time to shelter in. Time to wash your hands like you never have before.

So I restart my continuous search for Judith with an example of what NOT to do when it comes to social distancing.

Posted by judith2you on April 7, 2020 in Cacciatore, No category

Judith into the Woods

Yesterday I found a pretty basin.  Today, Andrii Bondart takes it into the woods to use it in his photo storyboard about Judith and Holofernes. 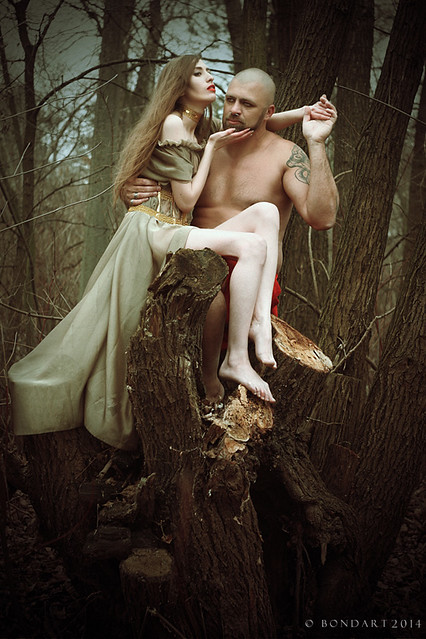 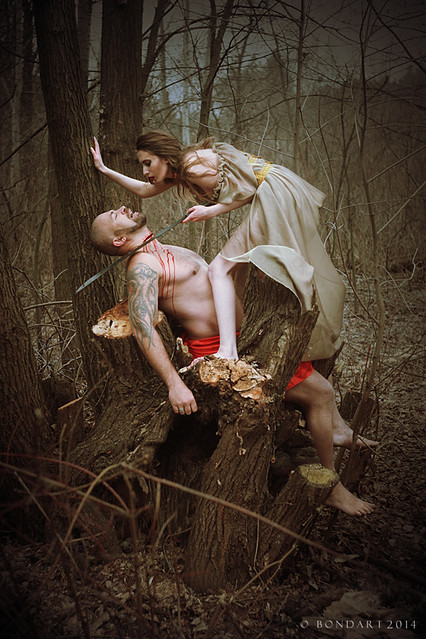 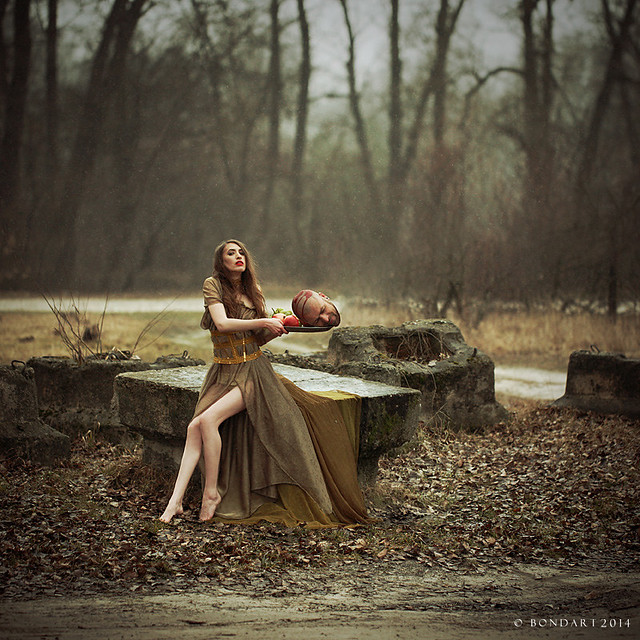 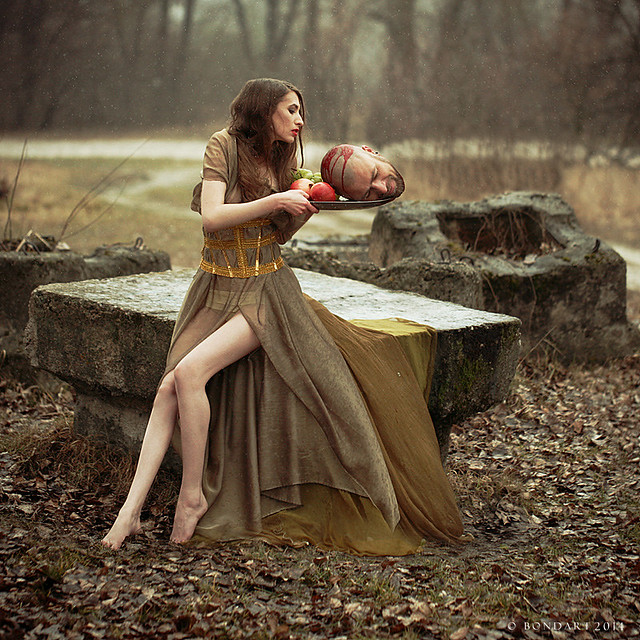 Bondart is a young photographer from the Ukraine – trained in the UK as well as self-taught.  I can’t decide if he only knows mystically beautiful people or if he just has the skill to make everyone look mystically beautiful.  In this series, he depicts Judith as very earthy – almost blending in with the woodland surroundings – and quite isolated in her violence against Holofernes.  The concrete slab in which she sits in the last photograph is particularly atmospheric – resembling a coroner’s table or a sacrificial altar, and reflecting the harsh, cold nature of her action.

While Bondart’s Judith is spectacular, not all his themes are downers.  I was especially attracted to his other series of Fairytales, in which objects (and a few people) defy gravity. Lighten up and enjoy!

Judith and Another Myth

Bear with me as I try to figure this out …

On the far left, a headless (and armless and legless) classical statue represents Holofernes. I must admit that – being accustomed to seeing headless and limbless classical statues surviving the devastations of time – this defacement seems commonplace rather than a heroic act on Judith’s part.  However, since this painting is about Judith, I will assume Holofernes has been intentionally separated from his head rather than decapitated by some random accident in an earthquake.

On the far right, it appears to be part of a classical frieze featuring an armless woman – although I am honestly not sure.  The easiest interpretation is that the frieze forms a background for the action, but easy is not always correct.

And then the centerpiece is Judith, ripe with contradictions.  Raven-haired and sloe-eyed, she wears a voluminous white skirt like a prima ballerina – topped by a shiny silver breastplate that has fallen from her shoulders – so that she is both feminine and masculine in her attire.  Her right arm is apparently part of Holofernes’ figure – so that she is both “in” and “out” of the classical statuary.  And most surprising of all, beneath the hem of her skirt protrudes a black dildo – once again implying both her masculine and feminine power and adding to the myth that her motives were sexual.

Unless I am totally wrong about this painting.  In which case the black wand is really an attachment from a vacuum sweeper (I am guessing either mattress nozzle or crevice tool), and Judith is in the process of cleaning up the mess she made.

A little more about the artist, Zoya Frolova.  Since her immigration to the US and this work in the mid 1990’s, her style has evolved to large canvases that play with light.  When interviewed about painting feminine themes in this earlier period (1) , Frolova talked about her art:

RB:  Where does your inspiration come from?

ZF: My most powerful impulses come from anger, from situations I cannot change and have no power over.

Perhaps explains Judith and the mess she made.

Judith: Does she or doesn’t she?

Only her hairdresser knows for sure.

Posted by judith2you on December 22, 2012 in Cacciatore

Judith in a Blue Dress

Posted by judith2you on November 18, 2012 in Cacciatore

This is one of THOSE Judith‘s.   The one that could be Salome.   But the artist titled it Judith and Holofernes, so I will accept that this is our heroine.  With the correct severed head.

Actually, I love this painting.  The rich colors, the flashing brush strokes, the languid atmosphere.  In this scenario, the work is done and Judith is savoring her success.  Laying down the sword in the forefront next to the head and taking a moment to collect her thoughts.   A smile lingers on her lips as she toys with her luxurious hair.  Taking in the aroma of the incense burner.

Assuming that is merely incense.  Or maybe not – and that is why she is so mellow.

Posted by judith2you on November 1, 2012 in Whorey

Two out of three websites agree: this is a painting about Judith and Holofernes.
One website disagrees: this is a Duet.

I conclude:  it is Judith and Holofernes singing a duet with a ukelele over a couple of adult beverages.  Maybe his poor singing voice was the real reason she lopped off his head.

Posted by judith2you on October 18, 2012 in Cacciatore

Confession #1:  Victoria Minenko is a divine dollmaker.   Her creations are so exquisite that I wish I lived by myself in a pink house that I could fill with frills.

Confession #2:  I do not think these dolls were meant to represent Judith the Decapitator.

Confession #3:  Even without that, these dolls are creeping me out.

Posted by judith2you on October 13, 2012 in Cacciatore

First and foremost, this is a brilliant tribute to Judith in bronze by Yarych.    The expressionless face as she points to Holofernes’ severed head with a dagger (Ok, that is not technically correct but I will assume the fauchion would have been too large) gives a somber mood to the moment.

Second, who KNEW she was so stylish!   How did she know that leather harnesses would break the bounds of bondage – moving from fetish to runway fashion?

How To Work The Leather Harness Trend In To Your Wardrobe

Like so many other things that were only recently considered too sexually charged to comfortably see the light of day, in a few short years the leather harness has infiltrated the realms of what we consider fashionable. That may sound like a critique but I can assure you it’s not; it’s merely a fact. When bondage and fetish fashion first hit our trend radars back in 2009 it was all bodycon, leather, studs and chains. But it’s progressed. It’s moved on. It’s no longer a season-defining trend as it was back then, instead it’s morphed into something that remains nebulously floating around the edges – more refined, more classically-inspired, and a little more isolated from everything else that’s going on.

And you know when something goes from the shelves of Coco de Mer to the runways of Hermes the shift is complete: it’s no longer luxury fetish, it’s just plain luxury. That’s where bondage, and the leather harness in particular, has ended up. Still far from mainstream, far from over-saturation, but with enough exposure that we no longer question it as strange or outlandish. And right now, that’s the best place it can be.